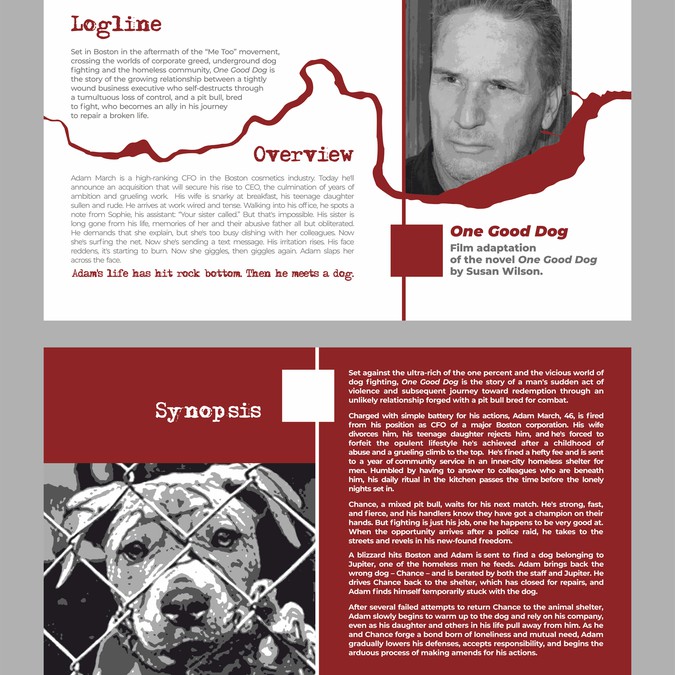 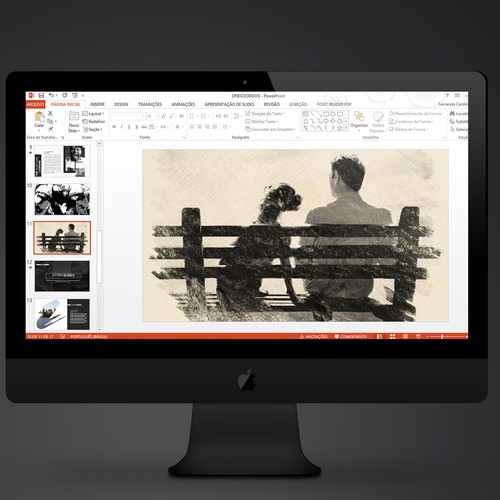 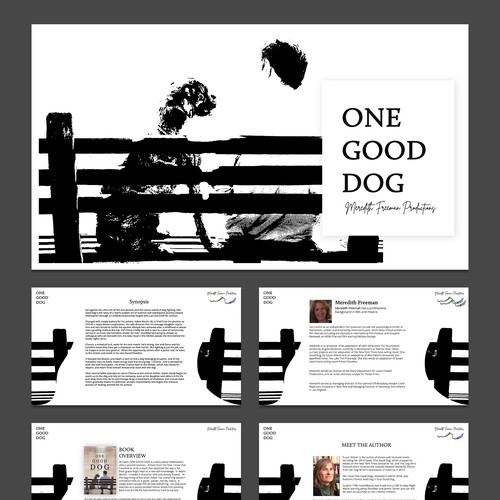 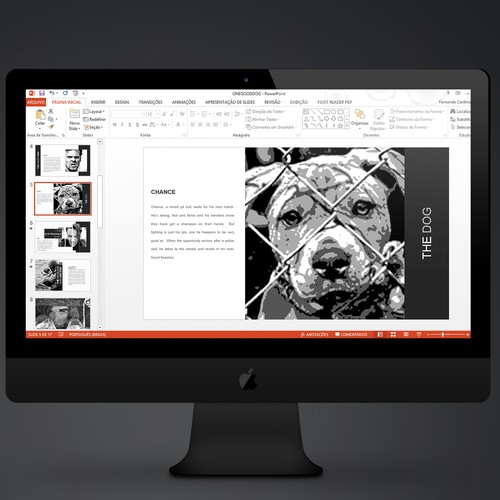 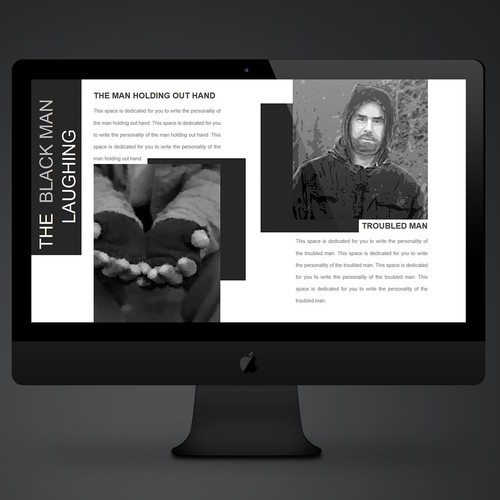 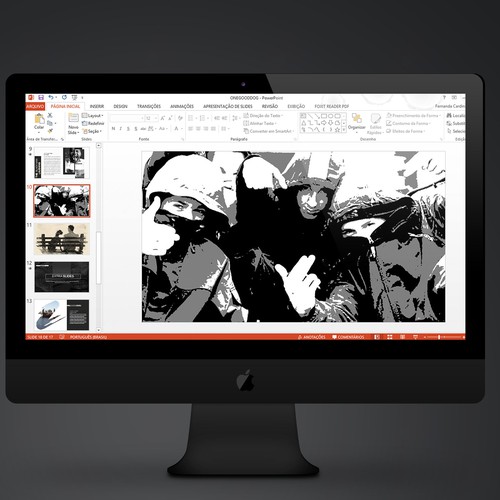 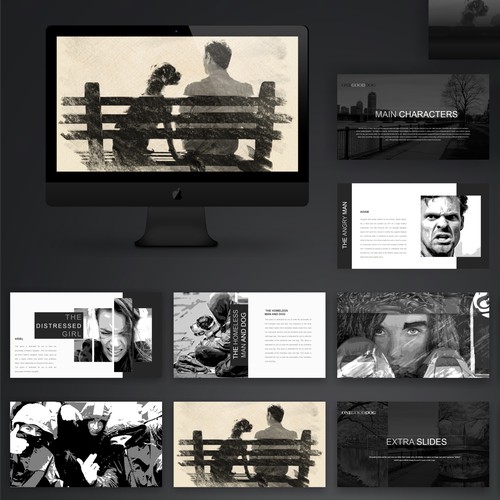 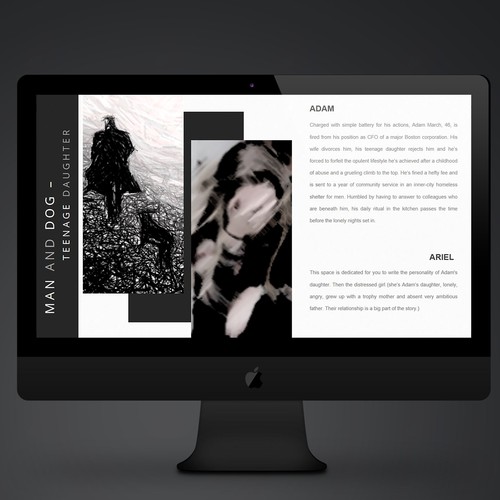 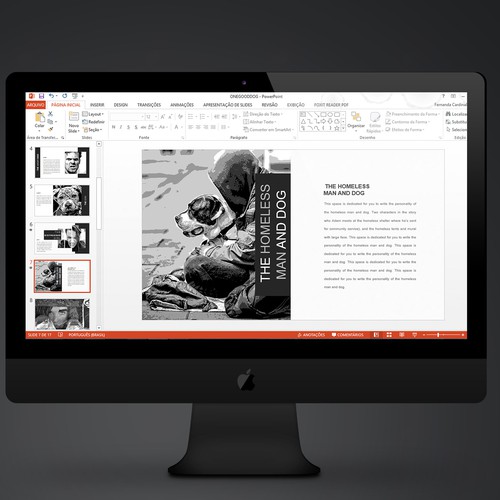 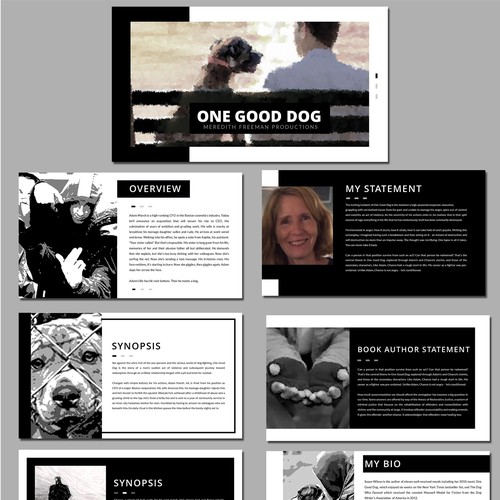 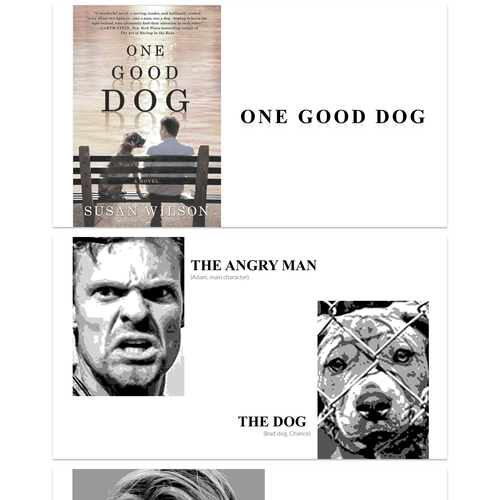 Yes, I have written copy and visuals.

This power point template is a pitch of a film adaptation of a New York Times Bestselling novel called One Good Dog, for film producers, investors, film companies, directors and possibly actors. I have an option on the book. I’m the lead producer (as of now.) I’m the screenwriter and have written a finished screenplay.

Below is a logline and overview to give you the basic storyline. There are six other pieces of copy for the template. It would be great if you could read it so you’ll get a good sense of the story and tone.

Logline
Set in Boston in the aftermath of the Me Too movement, crossing the worlds of corporate greed, underground dog fighting and the homeless community, One Good Dog is the story of the growing relationship between a tightly wound business executive who self-destructs through a tumultuous loss of control and a pit bull, bred to fight, who becomes an ally in his journey to repair a broken life.

Overview
Adam March is a high-ranking CFO in the Boston cosmetics industry. Today he’ll announce an acquisition that will secure his rise to CEO, the culmination of years of ambition and grueling work. His wife is snarky at breakfast, his teenage daughter sullen and rude. He arrives at work wired and tense. Walking into his office, he spots a note from Sophie, his assistant: “Your sister called.” But that’s impossible. His sister is long gone from his life, memories of her and their abusive father all but obliterated. He demands that she explain, but she’s too busy dishing with her colleagues. Now she’s surfing the net. Now she’s sending a text message. His irritation rises. His face reddens, it’s starting to burn. Now she giggles, then giggles again. Adam slaps her across the face.

Adam’s life has hit rock bottom. Then he meets a dog.

Target Audience
Unlike many dog films, this one isn’t a family film. It deals with underground dog fighting and homelessness. (The two dog fights are off screen… but we know what’s going on.) The leading man starts off angry and unlikable. He changes. But he still has farther to go.

The film is generally targeted for adults, but it could also be of interest to a younger audience who appreciate dramas, family dramas, dog movies, character studies.

More expressive than real. Mostly black and white images, blue color in the graphic of the river. Plenty of white space. The visuals should not overwhelm the writing. If possible, have the graphic of the river in each panel. sense of tone and feel of anger, loneliness, helplessness, and finally some reprieve (final image of man and dog.)

Order of copy:
Overview of story
Synopsis
My statement
Book author statement
My bio
About the book author
Praise of the book

Order of the visuals
Cover art of the book
Troubled man
Close up of dog
Teenage daughter
Homeless man and dog
Man holding out his hands
Hooded guys
Man and dog walking
Man and dog again on bench.

No more than 8 pages.

AIMS Presentation Template
US$ 199
Training Amusement Professionals - Individuals who are responsible for maintaining, inspecting and operating amusement a
9
entries
6
designers
This Life Once - Pitch Presentation
299 $
We are a former journalist and his family, traveling and telling inspiring stories.
32
entries
15
Designer
Designing a Fun Presentation for an Online Course
269 AUD
We sell personalised goods, but this is presentation is for an online course on "How to Source Products from China". Tar
7
entries
7
diseñadores
Data Driven Consulting Co Looking for Slides and Pitch Deck!
US$199
Hospitality and Travel Consulting firm. Ability to enable data driven decision making across organizations leveraging r
19
entries
8
diseñadores
Conscious Venture Fund Deck
599 $
We are an early stage venture capital firm that invests mainly in under-represented entrepreneurs. We have launched our
32
entries
7
Designer
Powerpoint template for investment bank
US$199
Investment banking - we help business owners and investors raise capital, represent them when they go to sell, and buy n
29
entries
15
diseñadores